I was beginning to wonder if I was going to have to go to Winnipeg myself and get Edward Forfar's Marriage Certificate in person.  As some of you may remember, in early May on this post I was rather chuffed to have discovered a record of Edward Forfar's marriage.  I duly sent off my credit card details and the charge was processed 23 May.  Having no reply after a few weeks,  I emailed the Archives at the end of June and was told it would take 8-10 weeks to process the request. More like 12 weeks I think.  So, if you are ordering anything from the Province of Manitoba be prepared to be patient.

Here's the envelope - see I scored three great stamps of otters, I think, which I hope to be seeing in animal (as opposed to person) in the not too distant future. 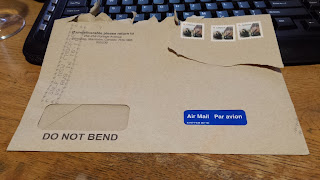 And here's a glimpse of the certificate

So here's what was on the certificate:

Lots of good information there.

The weird thing though is that I am pretty sure that Edward was born in Leamington rather than Perth but I am happy to be proved wrong.  This bears further investigation.

I am also fascinated that George is a civil engineer.  I had only ever known him as a shop keeper so he must have changed profession. I wonder where I go to look up records of civil engineers.  Does anyone out there know?  All suggestions gratefully accepted.

Crissouli said…
What a wonderful lot of information that certificate contains... glad it arrived so 'promptly'...
August 11, 2016 at 8:37 PM

diane b said…
That must be exciting for you. Information always leads to something else to look up or track down.
August 13, 2016 at 7:12 AM

Alex Daw said…
Thank you Chris, Jen and Diane for visiting the blog. It was really interesting to see what questions were asked on the certificate especially the literacy ones.
August 13, 2016 at 8:03 AM

Our archives contain records dating back to our formation. If you've got a question or would like to arrange a visit, please contact our Archivist:

Not clear if historical membership records are available.
The library is shut until sometime in September but if a visit is needed let me know.
Chris
August 16, 2016 at 6:21 AM

Unknown said…
Hi Alex
UK Register of Civil Engineers is on Ancestry - However no Forfars at all.
Chris
August 16, 2016 at 6:37 AM

January 01, 2020
Jill Bill from GeniAus once again invites us to reflect on our genealogical achievements for the year.
Here are the questions and I just know that my account of 2019 will not be a fabulous one but, if anything, it inspires me to greater heights in 2020:
1.  An elusive ancestor I found was
2.  A great newspaper article I found was about John Patrick or "Jack" McLoughlin, my mother's uncle,  in this blog post here.
3.  A geneajourney I took was to Melbourne.  I confess the trip to Melbourne was mostly about catching up with dear friends, going to a musical and doing a sewing workshop but I managed to convince a friend/chauffeur to detour while getting croissants one morning to have a look at an ancestor's house in Napier Street Fitzroy.  Who knows if it really was his house - numbers may have changed in the street - but I was just excited to be in the street where he used to live.  I wrote about Peter Sinclair in this and other blog posts.  I did try to go and see the P…
3 comments
Read more

How to knock down a brick wall

So, let me tell you a story about what happened to me the other day.  The other night actually.  Wednesday night specifically.

Wednesday night had been looming large in my consciousness because it was when my final assignment was due for the Writing Family History unit I'm studying at University of Tasmania (yes - even though I live all the way up in Queensland - don't you love modern technology?) The assignment was due at midnight.

So anyway, I'd decided to write about my two great-great-aunts Clara Rebecca Conner and Harriet Conner because I am obsessed with them.  During the course I had written a couple of short stories about them.


No that's not a photo of my aunts.  Aunt Fossie (someone else's aunt) is on the right appa…
11 comments
Read more

February 24, 2018
This shows Ida Zornig along with her bicycle and - very well behaved - dog (from the State Library of Queensland's Flickr stream). Sepians are well known for being very well behaved and therefore they will undoubtedly come up with something inventive and interesting in response to this prompt. Whatever you come up with, post your post on or around Saturday 24th February 2018 and add a link here.
One could not say that I am a big bike rider.  All right, I'll be honest, I don't possess a bike at all at the moment.  However, I have many pleasant memories of owning a bike or riding a bike at different stages of my life.  As a child, it was a means of freedom and adventure, riding around the suburbs or by the lake in Canberra.  As a young adult, for a while there, I would ride a bike from Taringa to work at Toowong (not a great distance I know) and sometimes at lunchtime, I would ride with my colleagues into town and back again for fun.  Once the kids came along, there were lots…
12 comments
Read more